September 2009
I was barely out of a 3 year long battle to get out of debt, in fact I was a week out of it. Still didn't have much money as the last of my dollars and cents went to pay off the last debt I'd had, but I knew there was a show that looked to be kool happening in Wichita. The Stray Kat Kustoms Starliner show is always the weekend after Labor Day. So that morning I had to decide if I could make it until the end of the month if I spent gas money driving to this show. I had been to the Stray Kat Kustoms Rocket show in Fort Scott, KS early in the year and I loved the cars that I'd seen, and I'd always wanted to go to the Stray Kat 500 but hadn't made it yet.

Of course I went. Of course. (I almost always go when there's a chance to see some kool rides) Determined to go on the cheap I stopped along the way at a BBQ contest that some friends were competing in, free food! SCORE! So after a free beer or two and an insane amount of amazing BBQ, I headed to the Starliner show. What I found was a great collection of kool kustoms and hotrods parked amongst a bunch of retired aircraft. 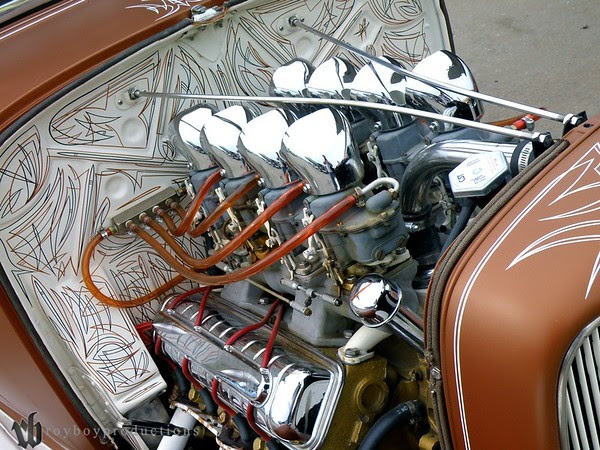 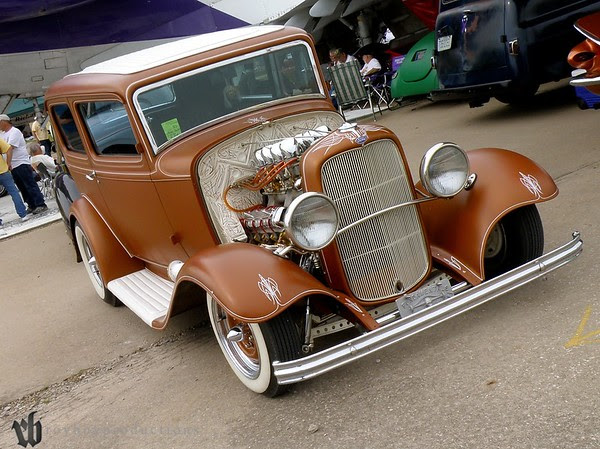 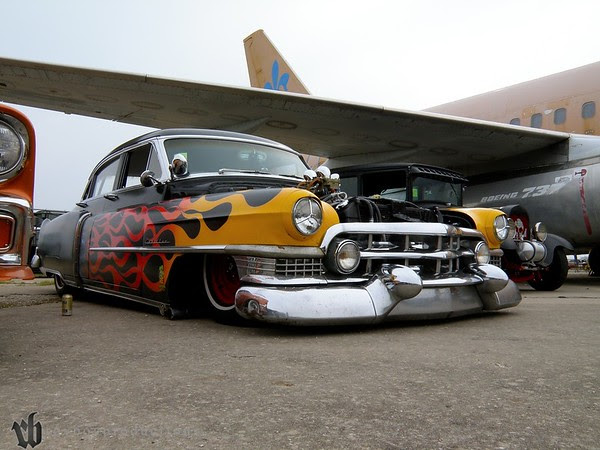 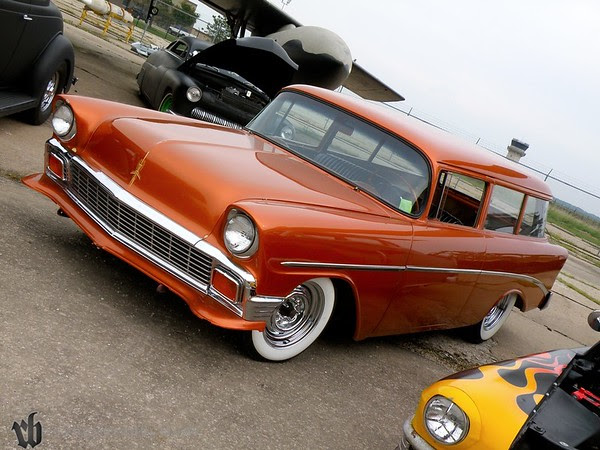 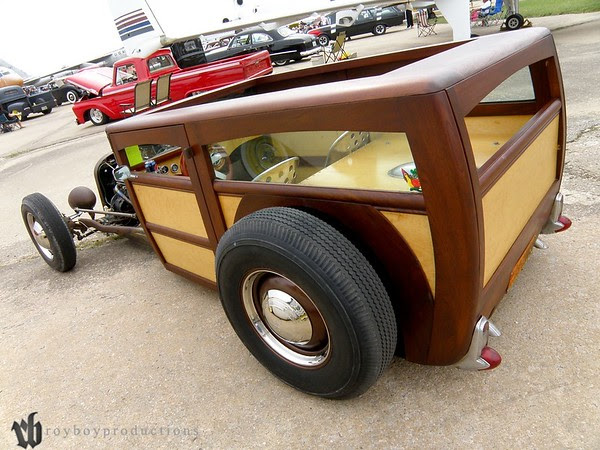 So I took a lot of photos! Obviously a kool environment. At this time I knew barely anyone in the crowd and unsure of the way this social circle worked I slipped in, shot photos and split. I had no idea how many great people that I was missing out on being friends with. Total shyness won out.

April 2010
Early in 2010 I decided to head out to Viva Las Vegas. This is the only show that I've really attended outside of the midwest-ish area. So on April 1, 2010 I find myself sitting in Wichita's Mid-Continent Airport waiting for a flight that was running late.

I grabbed the latest issue of Ol Skool Rodz out of my travel bag and started catching up on some reading, pretty heady reading! When I put the magazine down to grab a drink a kind lady across from me asked if I was into hot rods.

"Are you going to Vegas for the car show?" How did she know about this car show, the target demo for VLV for sure wasn't this lady. I nodded, full of curiousity.

"Us too!" It was then that I realized that the rest of her party was paying full attention, were they sizing me up wondering who I was just as I was them?

Her husband and his white haired, bearded friend talked to me abit about cars and where I was from and 'oh I was stationed in Salina back in the old days." I found it like most conversations with old car guys, pretty damned interesting.

Before we knew it, the plane was pulling up and it was time for us to go. I was pretty happy to have met some kool old car folk (folks into old cars, not old and into cars), but the big picture was I was heading out to Vegas for a couple of shows!

The show was an eye opening experience. I had never been to a show that was as much about a lifestyle as it was about the cars. It could be argued that it was less about the cars that year, I didn't care, there was a parking lot full of kool iron and some beautiful women walking around. I did see my new friends there but only briefly and from a distance. I figured Wichita isn't that big a place, I'm bound to see them at a show sooner or later. Little did I know that I'd been shooting photos of their cars at shows for 4 year... remember that shy part earlier? I talked to nearly no one the entire weekend besides some bartenders. 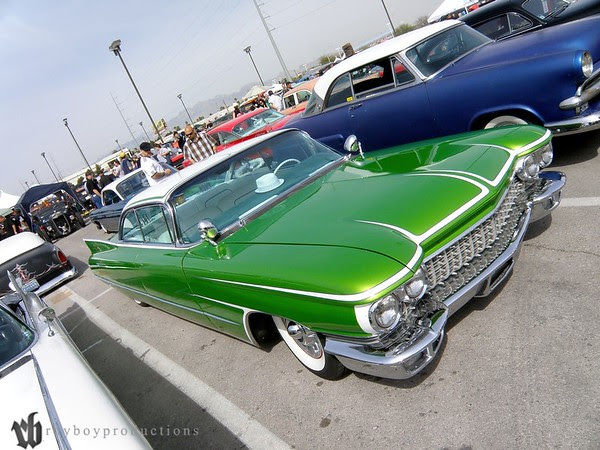 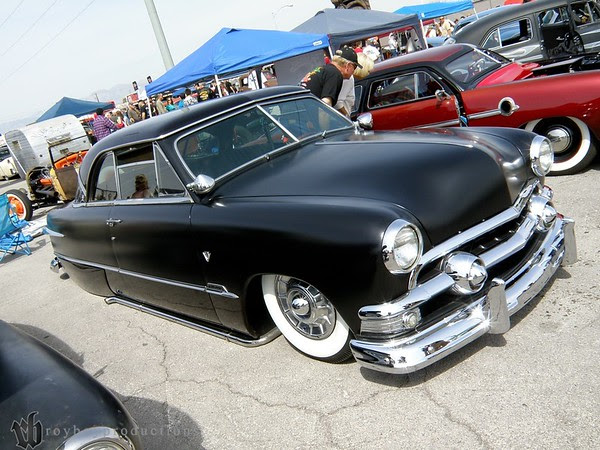 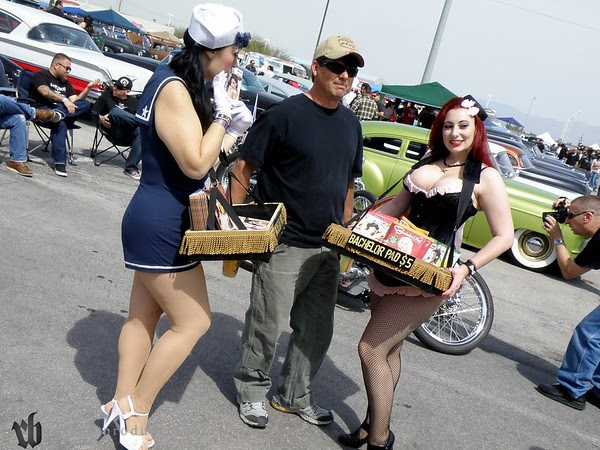 No dude I don't know you, you were just a casualty of an opportunistic photographer. 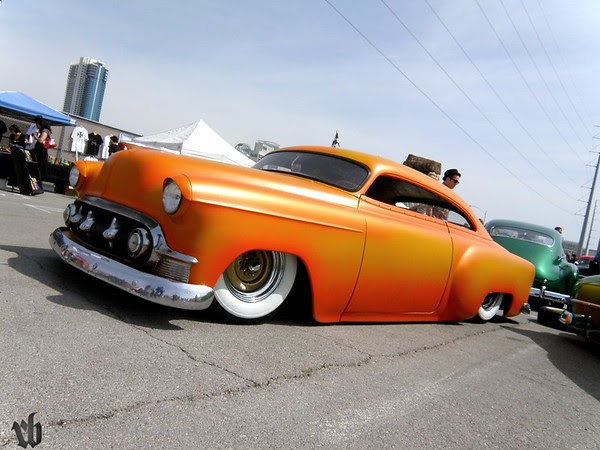 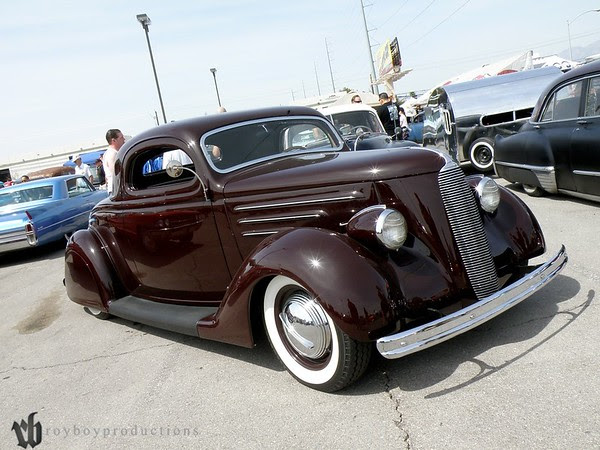 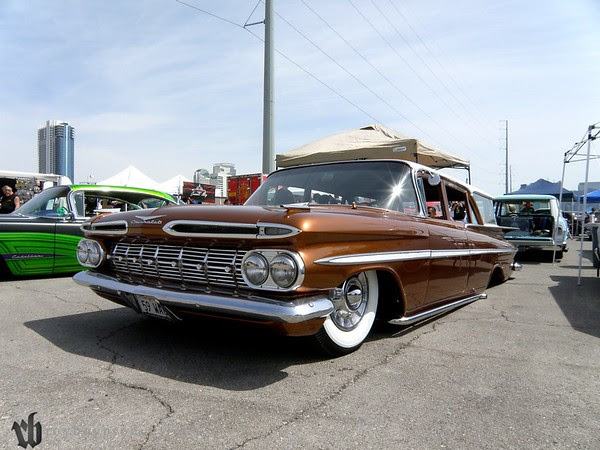 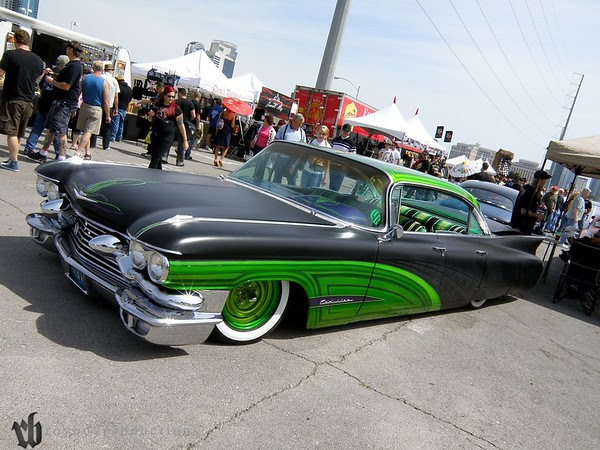 You get the idea, plenty of kool rides, and as you can tell a whole lot of people! 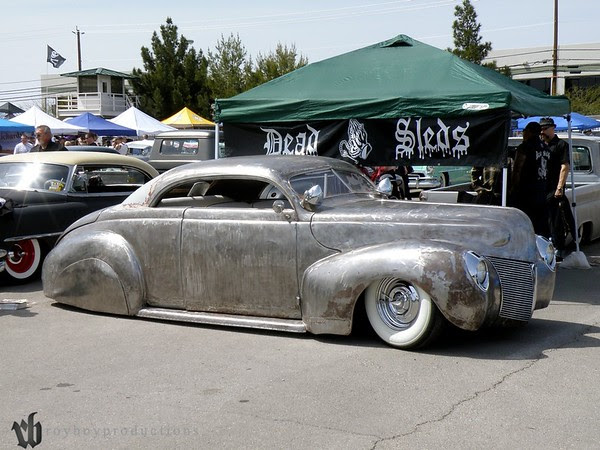 Okay, one more I couldn't help myself.

On the Monday after the show, I find myself waiting at the Vegas airport waiting again for a late plane. As luck would have it, a few rows away I saw my new Wichita friends. I picked up my bags and went over after we made eye contact and they waved.

We talked about the show, it wasn't what any of us were expecting. We talked about a lot, and honestly I don't remember it all, but as the conversation went on I realized that these 2 men and their wives were not just your run of the mill car folk, they had been there, done that, and had been doing it for a very very long time.

Finally I got up the nerve to mention wanting to become a professional custom car and hot rod photographer, and that I was going to all of these shows to practice shooting in the worst environments I could so that I could learn as much as possible... yadda yadda. Oh, and here's a book I  made...

The next 45 minutes the two men went through the book with their wives looking over their outside shoulders, turning the book around every page or so to point at a car and tell me who it belonged to, or a story about the car or a story about one like it. Never has any institution of higher learning taught so much as these folks were teaching me as we waited for a delayed plane. The loved the book, we all knew the work wasn't stellar but they loved that I was taking the time to document them and their friends' passion, and they heartily encouraged me to keep it up. We exchanged phone numbers when the announcement was made that the plane had arrived. I was going to take them up on the offer to come visit and listen to more stories.

May 2010
The first weekend of each May is the Stray Kat 500 in Dewey, OK. This was to be my first trip, my new friends were going to be there and I had been wanting to go for a couple of years. I knew of a few key folks due to the H.A.M.B. so this already had the makings of a bit of a different show for me instead of just shooting pics and splitting, I had people to talk to.

Somewhere in here I had the idea to produce some small books that were kind of like the little paged magazines of yesteryear. Each one was 60 pages and featured 1 show. I had created a few of them, designed them, filled them with images, printed them, bound them, the whole shebang. The entrepreneur in me decided that I was going to make money selling these books, the hardback that my friends and I had shared in the airport, and a few other items. I didn't factor in that if I was sitting in a booth selling items then I couldn't be out there shooting photos to make more of them! Thanks to my Dad and my Uncle Tom for booth sitting for me that day so I could take photos. 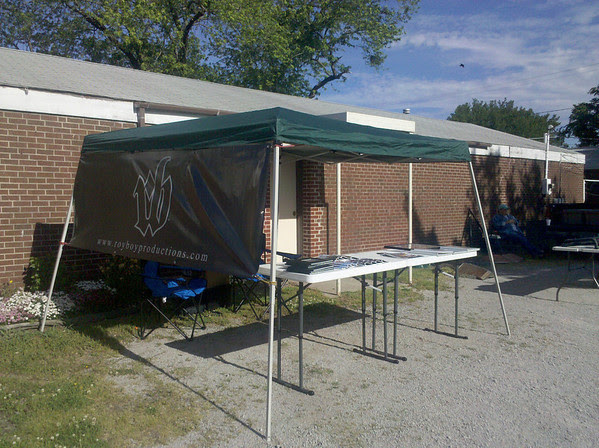 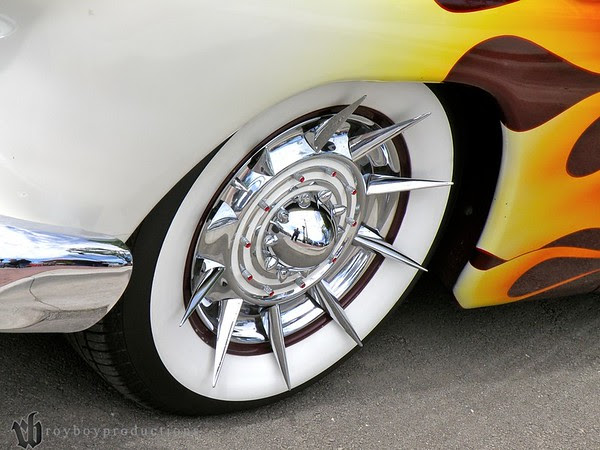 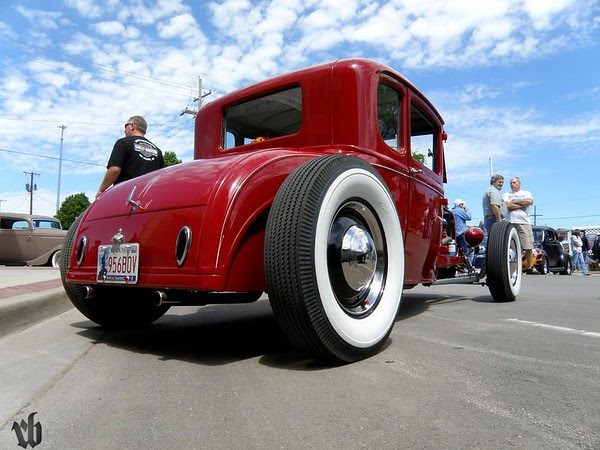 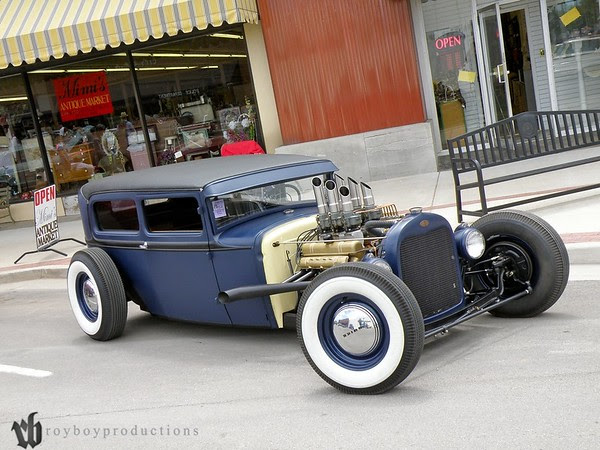 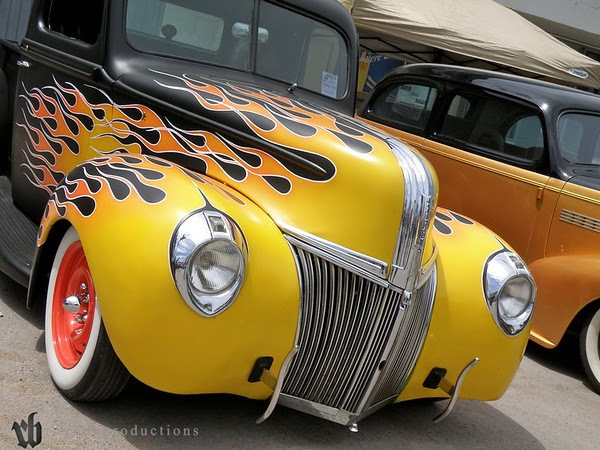 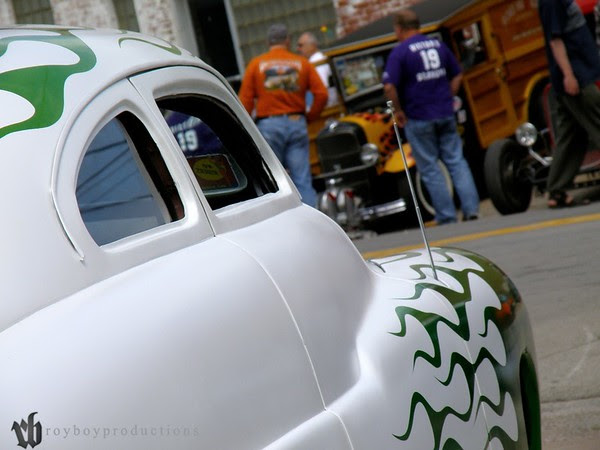 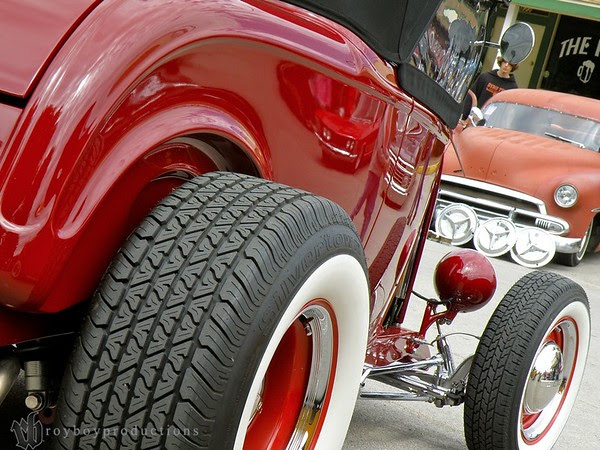 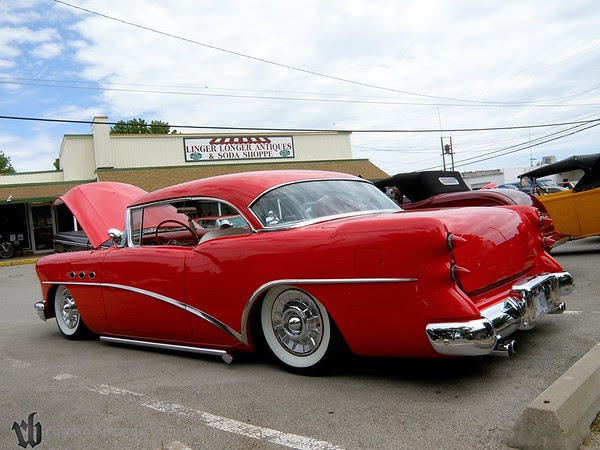 As it would turn out my new friends had a lot of friends at the 500 that day. They came over and bought just about everything my meager booth had to sell. The came to talk to me, they sent their friends, they introduced me to tons of people and made sure people knew that I was to be supported, I was the only one paying attention to the passion of building kool kustoms and hotrods enough to not only take photos and put them online for the world to see but to make books and such from them. Monetarily this was a good weekend, the only good weekend I ever had with that meager booth. But relationally, it was a gold mine.

Hub & Gloria Harness and Steve & Carol Albers, thank you. Thank you for encouraging me when I wasn't very good (I say that I've not improved much to this day), and for instantly welcoming me into your kustom family. When I still thought that this was about trying to make money with my passion for kool cars I was getting very discouraged. I was ready to quit. It was your welcoming smiles, your friendship, your generosity of time that made me realize that the treasure in this adventure would never live in my wallet but always in my heart. The friends that I've met since meeting the four of you have been amongst the greatest people I've ever been lucky enough to be around. 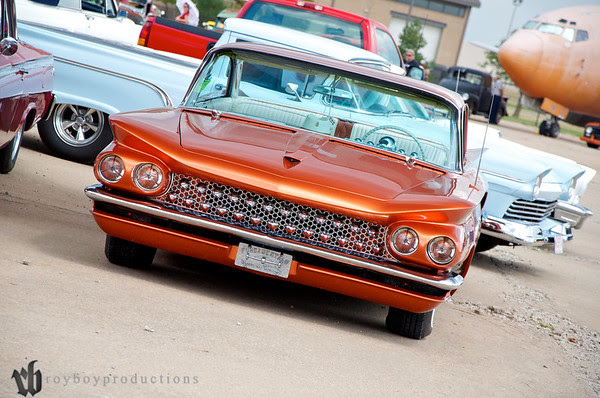 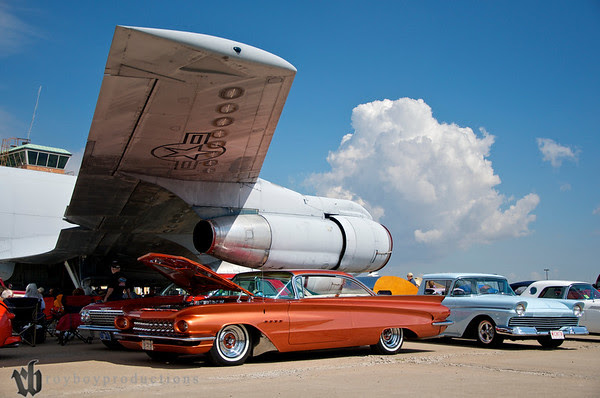 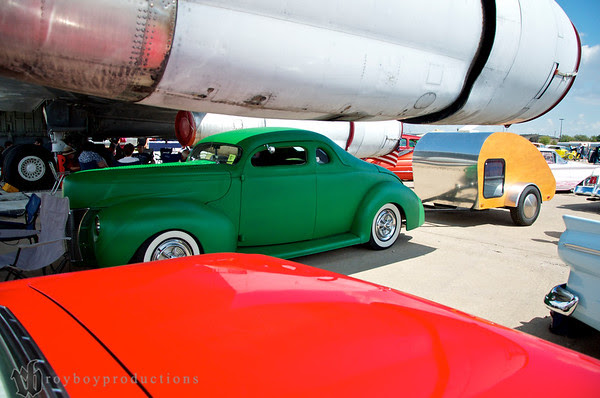 Steve & Carol's 40 Ford with 250,000 miles on "this drivetrain" and a custom hand built trailer behind it so that Carol would travel with Steve out to Santa Maria, California instead of flying.

The point of this whole story is simple. Kustom folks are some of the best people on earth. Find some, make friends and if you're lucky... the true riches of your life will multiply.