Music To Drive To: The Jade Idol "No Control" 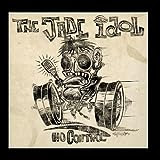 From time to time on here I'll pick a record and review it, or like this one crow about it because I think you should go buy it, for the first "review" I've chosen The Jade Idol's "No Control."

I was first made aware of The Jade Idol through facebook. Videos began appearing every once in awhile, I had to check them out. What I found was raw, pure, unadulterated rock and roll. The more I heard the more I liked, so yes this review is a bit skewed, I am a fan.

The Jade Idol's CD "No Control" was released March 19, 2012, just weeks before the Lonestar Roundup in Austin, TX. This plays in because the band is based out of Austin, guitars and vocals handled by Bob Bleed, with Mark Ford on drums. Bleed is one of the talented crew at Austin Speed Shop while Ford has a background in the recording studio. When I asked Bleed to give me a sentence that describes the record from his point of view he said, "I'm really proud of this album, recorded it in my bedroom!" proving that if the music works, it doesn't matter where it was recorded.

I was able to download the songs from itunes just days before a trip to The Jade Idol's home town of Austin for the Lonestar Roundup. 9 hours each way to jam out provided more than one listen of "No Control" It's not a stretch to say that with each time through the tracks the record moved farther and farther up my list of favorites.

Song by Song:
Click on the song title to listen to a sample on Amazon
Blow My Mind

What You Gonna Do

That's What I Say

Videos
Stuck On You Video

Final Thoughts
In an age of over processed, sanitized, perfected studio creations passed off as music, The Jade Idol is refreshing. Much as the White Stripes brought lo-fi, simple, loud rock and roll back to the masses, The Jade Idol does so without sounding like a rip-off. The blues gave birth to rock and roll, The Jade Idol pays homage to both without sounding dated. When you strip away the layers of today's popular music you find nothing supporting the base, just studio trickery and digital bandaids, but when you listen to The Jade Idol, you're listening to the foundation, there is nothing to strip away. Long live rock and roll.


Links:
The Jade Idol "No Control" on Amazon