I've had my 1963 Ford Galaxie 500 since 2004. When she first entered my life she looked like a 70's cruiser. Stock body, dark tinted windows (80's probably), Cragar S/S wheels and some fairly large raised white letter tires. 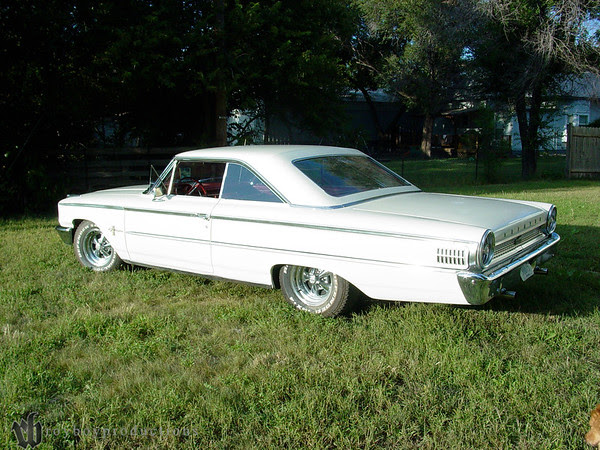 A few years went by, after an engine rebuild and upgrading the 352 2bbl to a 390 4bbl, swapping the Cruiseomatic to an AOD and adding some red paint to the roof it was time for a change. Just before Christmas 2012 I took the car to my friend Jeff Myers at Premier Body & Paint in Arkansas City, KS for a bit of an update. Earlier in 2012 I had replaced the Cragars and raised white letter tires with some Speedway Motors steel wheels with Coker American Classic tires after having Jeff do some kool fadeaway paint on the wheels. Spider caps finished off the wheel/tire look. 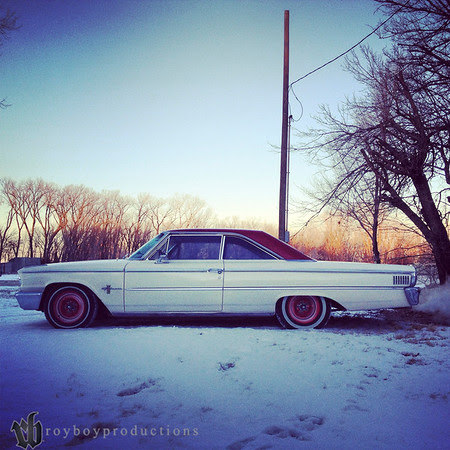 Now this car is not straight, there are lots of small areas that need work, so I knew this paint job would be nothing more than a very kool bandaid to get the Galaxie by for a few years. The goal is to drive the Galaxie while I work on the 51 Ford until the 51 is up to a daily driver type of reliability then take the Galaxie down to bare metal, fix the sins of the previous owners and do it all again.

Within hours of leaving Jeff's shop the cell phone pics started to come in. I should have bought stock in 3M as world wide tape supplies had to have dropped when Jeff started to lay out the panels, scallops and outlines. 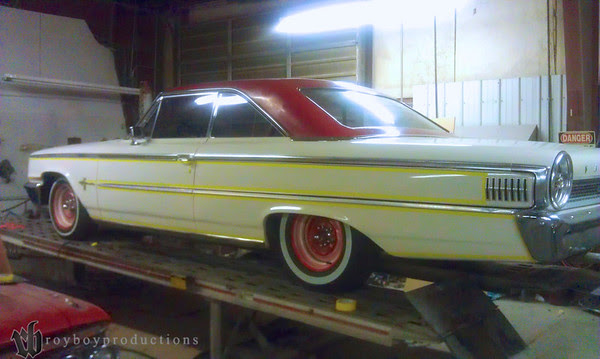 A day or two later the panels/trim outlines on the sides were already in color. 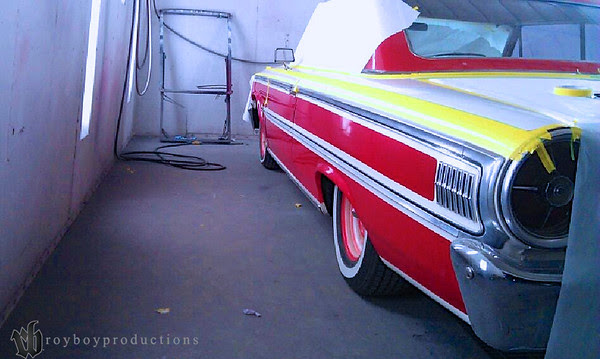 Shaving the trim on the Galaxie was not something that I was financially ready to do at this point, there are somewhere in the neighborhood of 30 holes per side that need filled. So I asked if Jeff would do a Larry Watson style outline job on the sides. 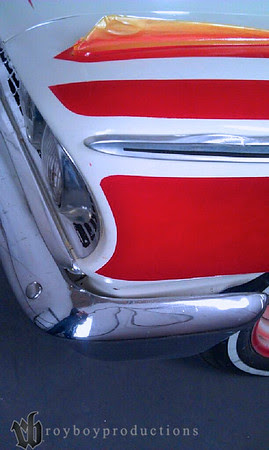 Above the trim Jeff added some long scallops to tie the hood, roof and deck lid all in. 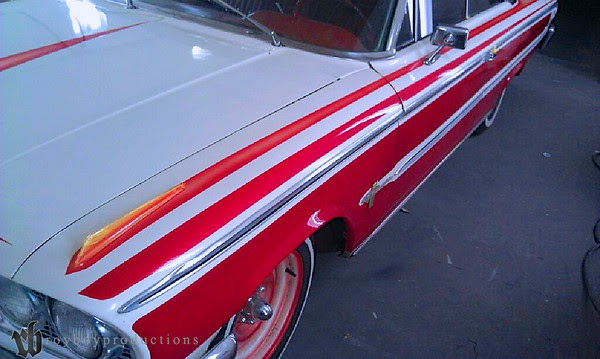 For the larger flat areas of the car t-shaped scallop were added. 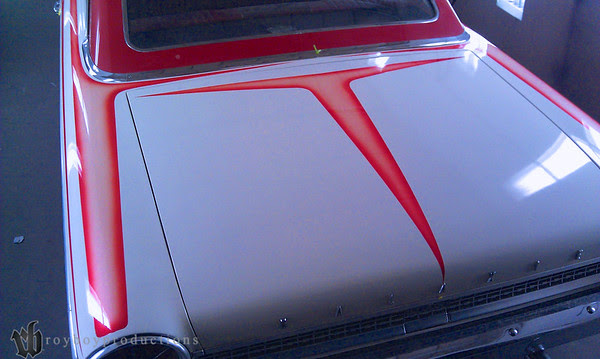 That left entirely too much blank space for Jeff's mind so some panels were added on all 3 surfaces. Fogged in edges, and cobwebbing over them all to keep the flow from front to back. 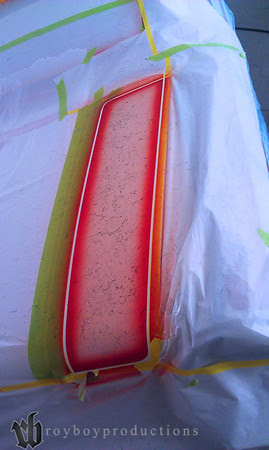 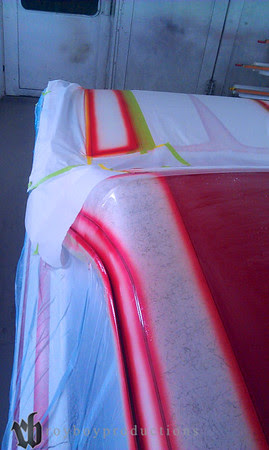 Soon Jeff was sending me shots of the car done and outside of his shop. I was blown away at the transformation from mullet 70's style to early 60's kustom. 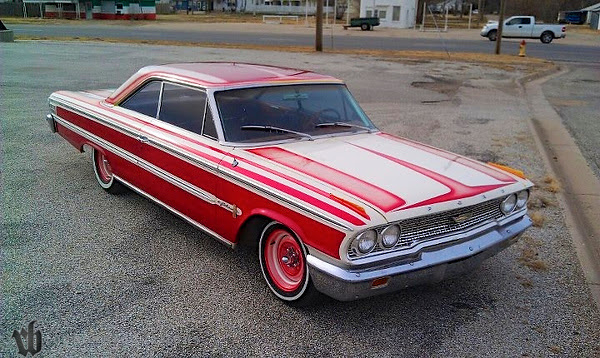 I can't say thanks enough to Jeff for the hard work over the Christmas/New Years week. I am damn proud to have a friend like him devote his time to my ride. 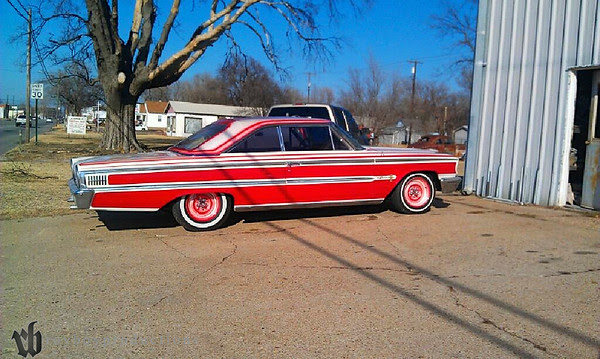 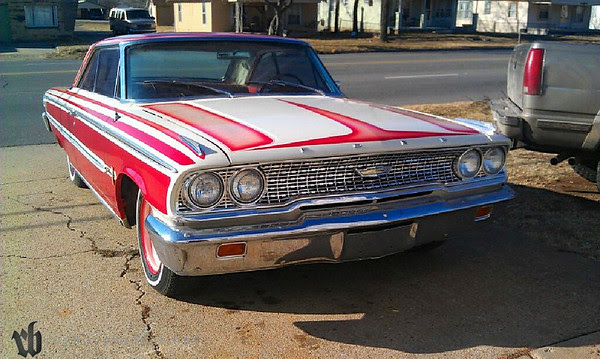 The car will be in the Kustom City display at the 2013 Starbird-Devlin Car show "The Wichita Tradition" in Century II in Wichita, KS Jan. 18-20th where pinstriper Clint Rowe will add his handiwork to outline all of the new paint. 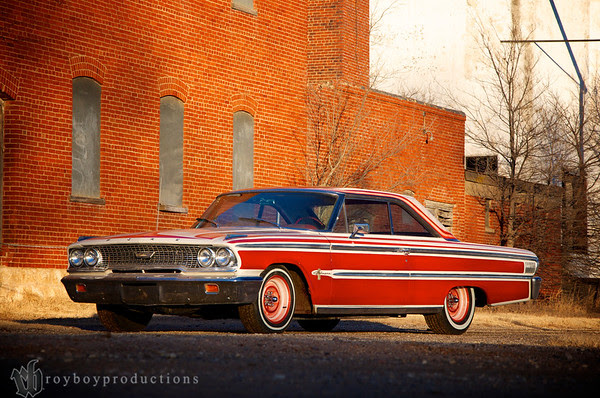 The plan is to upgrade the generator to an alternator as the lights dimmed and the Gen light came on during the return trip from Premier Body & Paint, after that a set of Bellflower tips will be installed to continue with the 60's boulevard cruiser theme. New taillight lenses will be added as well as some headlight jewelry. 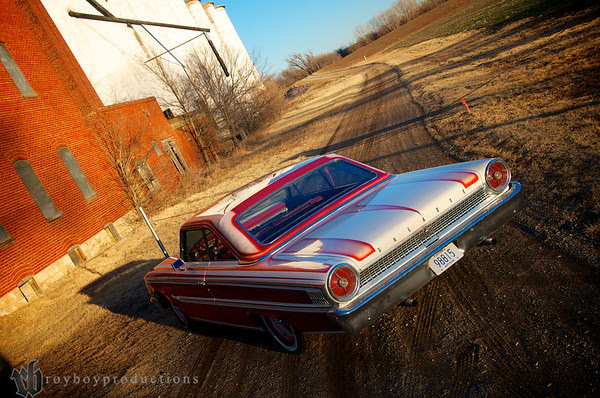 Future upgrades include a new aluminum radiator, and some kustom grille work, oh and driving her all over the midwest this year to shows.

Posted by royboyproductions.com at 6:25 PM